Early in this by-the-numbers comedy drama, a young salesperson eagerly enthuses to retiring couple Douglas (Bill Nighy) and Jean (Penelope Wilton) that 'the grey pound is very strong at the moment'. We’re quite clearly supposed to see this whippersnapper as insensitive and opportunistic, but his position seems plainly analogous to that of the producers of this film, who have clearly decided there is an audience of a certain age ready and waiting for ‘Love Actually for the over-60s … but in India!’ They’re undoubtedly correct, and they don’t hurt their chances of satisfying that audience by casting an irresistible army of pension-age talent including Judi Dench, Maggie Smith and Tom Wilkinson, all on excellent form. But the story, about a group of unconnected British retirees who come to the titular hotel in Jaipur and find resolution for their various issues and challenges, feels too calculated to offer anything more than disposable entertainment at best, and cheaply manipulative emotional kicks at worst. Actors this good can invest even this trite material with credibility, but they deserve better.

This review first published at The List's Film website.
Posted by Paul Gallagher at 09:24 5 comments:

David Cronenberg’s new film is a change of pace for the seldom gore-shy director of The Fly and A History of Violence, being a talky period drama about the birth of psychoanalysis in the early 20th century. But while the body-horror auteur’s traditionally extreme visuals are absent, his ability to create a sense of broiling unease is palpably present, ensuring what could have been a dry history lesson is in fact a strangely gripping intellectual thriller. What Cronenberg and screenwriter Christopher Hampton (adapting from his own play, The Talking Cure) offer here is a rigorous dramatic investigation of the theory and practice of psychoanalysis, seen through the prism of the relationship between the fledgling discipline’s two main proponents, Sigmund Freud (Viggo Mortensen) and his protégé Carl Jung (Michael Fassbender). It makes for a fascinating imaginative insight into a moment in history when the world of thought, and the way that we think about ourselves, was being fundamentally reshaped.

The film begins at fever pitch as hysterical patient Sabina Spielrein (Keira Knightley) is manhandled into Jung’s Zurich hospital. The story then follows Jung as he successfully treats Spielrein using Freud’s controversial principles, but then begins to question his theories as he is drawn into a transgressive affair with her. Fassbender bears the bulk of the film’s dramatic weight, and thoroughly convinces as the dispassionate analyst, only too keen to use his own life as a testing ground for scientific breakthrough. Mortensen is equally effective as Freud, playing him with a humorous charm that conceals an unsettling lack of humanity. While some audiences may struggle to warm to A Dangerous Method’s largely cerebral pleasures, those keen to delve into the darker recesses of the human mind couldn’t wish for a more capable guide than Cronenberg.

This review originally published in The List magazine.
Posted by Paul Gallagher at 09:08 No comments:

This reteaming of Juno director (Jason Reitman) and writer (Diablo Cody) is a fiercely dark character comedy that once again demonstrates the pair’s refusal to be limited by genre conventions, no matter how sacred. The set-up is straightforward enough: recently divorced writer Mavis (Charlize Theron) decides on a whim to leave her bombsite Minneapolis apartment and drive back to her tiny hometown in order to win back Buddy (Patrick Wilson), her one-time college sweetheart. But Buddy is now a happily married new father, a fact that Mavis has convinced herself can only be superficially true; how, goes her reasoning, could anyone really be happy in a hick town where nothing of significance ever happens? Buddy obviously needs to be rescued.

It all sounds far-fetched enough to make for standard quirky rom-com material that will all rather improbably but reassuringly turn out nice in the end. But despite initial appearances, Young Adult is not that kind of film; somewhat daringly, Reitman and Cody are aiming for something much more truthful and ultimately more painful. Mavis is a conceited car-crash of a woman - the prom-queen who never grew up - and her solipsistic worldview and searing tactlessness are not character foibles that can be neatly ironed out by this story’s end. Theron’s performance was ignored by the Oscars in favour of more family-friendly fare, but in truth her portrayal of Mavis is perfectly judged, and delivered with an unflinching disregard for audience sympathy that few actresses of her standing would have the guts to go through with. The film also features a very strong supporting turn from Patton Oswalt, one of the great ‘where-do-I-know-him-from?’ character actors who, as Matt, the formerly ignored high-school nerd attempting to deal some truth back to Mavis, brings a touch of warmth and acts as a much-needed go-between for the audience.

As in his previous film Up in the Air, Reitman is interested here in offering a patient, perceptive and often very funny analysis of a problematic character. But where the former film was subtly subversive, particularly in its conclusion, here Reitman wears his rebellion on his sleeve. Young Adult’s consistently jarring tone, powered by Cody’s crackling self-aware dialogue, further confirms Reitman’s instinct for original approaches to storytelling. And as a bonus, the film will delight fans of peerless Scottish indie band Teenage Fanclub, whose song The Concept is the cornerstone of the film’s perfectly selected 90s rock soundtrack.

This review was originally published at The List's Film website.
Posted by Paul Gallagher at 09:20 No comments:

January - The Iron Lady, War Horse, The Descendants, Haywire and The Artist reviews

Since I'm generally rubbish at keeping this blog up-to-date, I've decided to just do it monthly, and post links to the current films I've reviewed, along with the odd bonus thought on anything else I've been watching that I didn't properly write or talk about anywhere else. So here's January. Following months will be a bit more timely, maybe.

The Iron Lady (The List)
A film about the cost of power that features a brilliantly convincing lead performance from Meryl Streep, but offers no significant insights on the lady of the title.

Haywire (The List)
A stripped-down action chase movie directed, shot and edited by Soderbergh with a level of energy and invention that puts most action directors to shame.

The Descendants (The List)
A rich mix of relationship drama, character comedy and weighty meditation; fertile ground for Alexander Payne, a filmmaker with a fine-tuned ability to balance humour and heart in ways that ring true.

Movie Cafe - Radio Scotland
26th January - I reviewed The Descendants on this edition of Movie Cafe, as well as discussing the Oscar nominations with host Janice Forsyth and fellow critic Nicola Balkind. You can download the show as a podcast from the link.

22nd December 2011 - Officially yes, this aired last year, but we began the show with a review of The Artist, which was only properly released in the UK in January. There's lots of other fun stuff on this show as it was a review of the year featuring much witty chat from Hannah McGill, Siobhan Synnot and Janice Forsyth.

Also...
I thought Steve McQueen's film Shame was very good, featuring an excellent performance from Michael Fassbender and being a timely and appropriately disturbing portrayal of a man effectively enslaved by an addiction to sex. I also found a lot to enjoy about Like Crazy, an indie romance about the pressures and struggles involved in trying to maintain a long-distance relationship. Felicity Jones and Anton Yelchin are very likeable as the couple, and while the film starts out feeling a little too self-conscious and wilfully low-key, I found myself slowly drawn in, and by the bittersweet end I really cared about these two.
Posted by Paul Gallagher at 21:00 No comments:

Email ThisBlogThis!Share to TwitterShare to FacebookShare to Pinterest
Labels: haywire, like crazy, oscars 2012, shame, the artist, the descendants, the iron lady, war horse 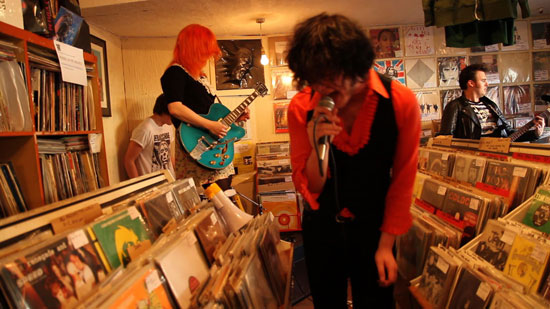 The tagline for this affectionate record store documentary is ‘High Fidelity with a Northern accent’, and it is a rare case of the marketing being bang on the money. A labour of love for director Jeanie Finlay, who also produced the film and did most of the camerawork, Sound It Out is as low-budget as professional filmmaking gets, but Finlay’s passion for the subject is evident in every frame; the film resonates with the soul of a music lover.

The subject in question is Sound It Out Records, Teeside’s last surviving record shop, and something of a haven for Northern England’s record-lovers, music completists and social misfits. Through interviews with employees and customers, as well as plenty of in-store footage, Finlay builds up a picture of the community this store, and more specifically it’s devoted owner Tom, has cultivated and in many ways cared for for over 20 years in Stockton. It’s touching, at times very funny and also surprisingly moving. As well as crafting an insightful portrait of a specific place, Finlay effectively captures the moment of transition that record collectors worldwide are in, as the physical, tangible aspect of owning music gradually disappears. Highly recommended.

Showing at Glasgow Grosvenor on Weds 16th November, 6.30pm and Edinburgh Cameo on Thurs 17th November, 9pm, with a post-screening Q&A from director/producer Jeanie Finlay at both screenings. More info at www.sounditoutdoc.com. This review first published in The List.

Posted by Paul Gallagher at 14:52 No comments:

Paul Gallagher
I am a Glasgow-based film journalist, writing regularly for The List magazine and website. I also contribute to BBC Radio Scotland's Movie Cafe, and I never get tired of that feeling when the lights go down and the screen lights up.